Since my last post on search engine market shares in 2008, Google’s dominance in the U.S. and worldwide markets has only risen to even loftier heights. However, with signals in place that 2012 could see once vital Yahoo lose even more ground to Google and Bing, which didn’t yet exist in 2008, it’s worth a look to see how the search engine landscape has changed over the past few years.

2009: Replacing MSN Search, Live Search, and Windows Live Search, Microsoft launched Bing on June 3, 2009 amid much media fanfare. By the end of 2009, Microsoft/Bing’s market share was 10.7%, representing a growth of approximately 2.7% over the former Microsoft search engines it replaced.

With Google’s market share growing from 63% to 65.7% over the course of 2009, it became apparent that Bing was pulling users from other smaller search engines, most notably AOL which saw its market share drop a staggering 20% in that year. Yahoo, in comparison dropped less than two percentage points, but was still on the market share’s losing end. 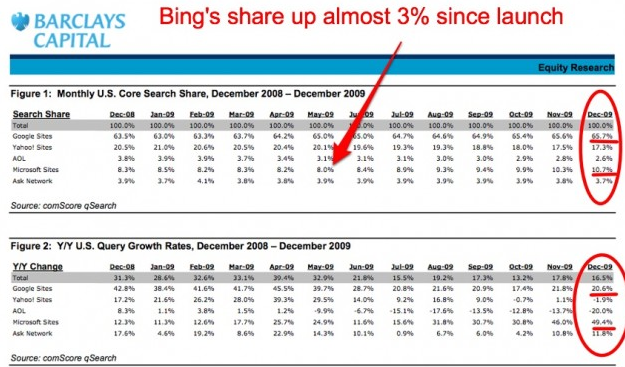 2010: Looking back at 2010 Q4 market share statistics from around the world, the real runaway story of 2010 was Google which crossed 70% of worldwide searches in 2010 to end the year with a 71% market share. In the U.S., this figure was even higher. Bing held steady at 9.8% of global searches, again at the expense of smaller search engines. Smaller search engines shrank to less than 5% of all search traffic. Yahoo, showing the first signs of real trouble, dropped from a 20% market share to 14.5% to end the year on a disappointing note.

2011: In 2011, Google surged to an incredible 89.94% market share worldwide at one point, leaving very little of the pie left to its competitors to divide. According to Read Write Web, February 2011 marked the first time Bing overtook Yahoo. That month, Bing outranked Yahoo by a half percentage point. Of course, this seems like peanuts compared to Google, but is still significant.

2012: Is Yahoo over? The proof may really be in the market share data. Looking at a comparison just between December 2011 and January 2012 finds the once dominant search engine slipping more than 4% in its search share, dropping from 15% to 11% world wide. In comparison, Bing gained a .42% — small gain, but still better than losing a half point.

Future predictions are calling for the race for solid second place to really heat up this year between Yahoo and Bing. Yahoo currently uses the Bing results and has constantly changed search providers in the past they served Google results. AOL and Ask are both expected to further deteriorate.

What do you think the future holds for search engines? Will Google continue to reign supreme? 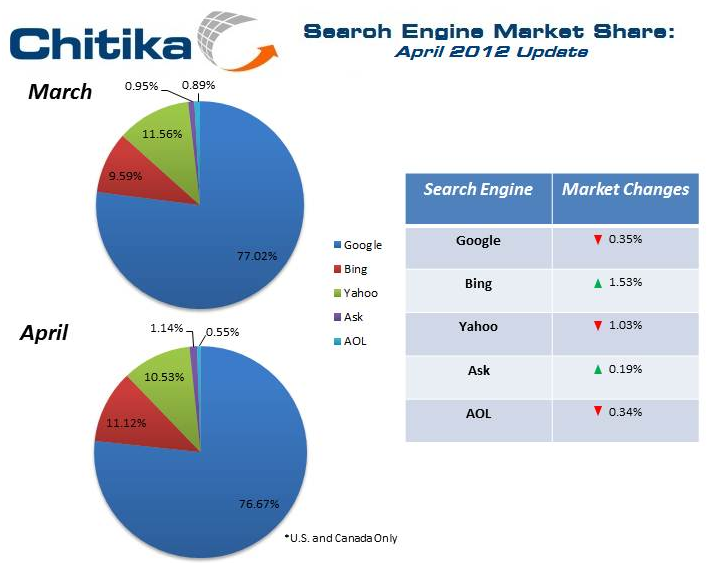 With Bing’s Social Integration into search paving a new frontier for the Search Engine landscape we will have to see if they can pull some search rank percentages from this new social feature. Considering that Facebook search only searches Facebook profiles, it would be interesting to see if a union of Bing and Facebook with bring competitive market share to the table. Since Google seems to revamp social sites with social circles to try to cut into Facebook’s social share (adding rumors that Google + will help rankings to gain a user-base of marketers buzzing), it would be interesting to see Facebook strike back and enter the Search landscape by either integrating bing or buying a search application.