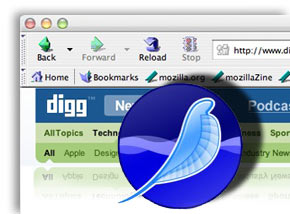 Looks like the latest incarnation of Netscape Communicator is now on OS X under Mozilla as Sea Monkey. I am seeing speeds that seem quicker than Camino plus all the old features of communicator and the same user interface of the older browsers.

Unfortunately, I do not have the Firefox plugins that I have grown accustomed to, so the add-on features are missing. If only we could get this speed in Firefox. How I would love to not crash in Firefox and get speeds like Safari and now Sea Monkey.

Is it just me? There’s no spelling feature like in Firefox, it just no frills anymore. Why would Mozilla make a browser as amazing and popular as Firefox and then develop Sea Monkey?

Why won’t Firefox become faster on a Mac and use the GUI? A Mozilla programmer for Camino once told me Firefox would have to be rebuilt to use the Mac GUI.

So overall if you’re on a Mac and do not rely on plugins, spell checking (which can be done in Composer, but requires copying and pasting) and want to use a mail and communication program similar to Netscape Communicator of old, then Sea Monkey is for you.

Why not just put these features into FireFox and make a real powerful communication tool? All in all, if you do not like the extensions of FireFox and want another Safari alternative, then Sea Monkey is sure to impress you in the speed zone!

For those of you using digg, this is the fastest loading time on digg that I have had.